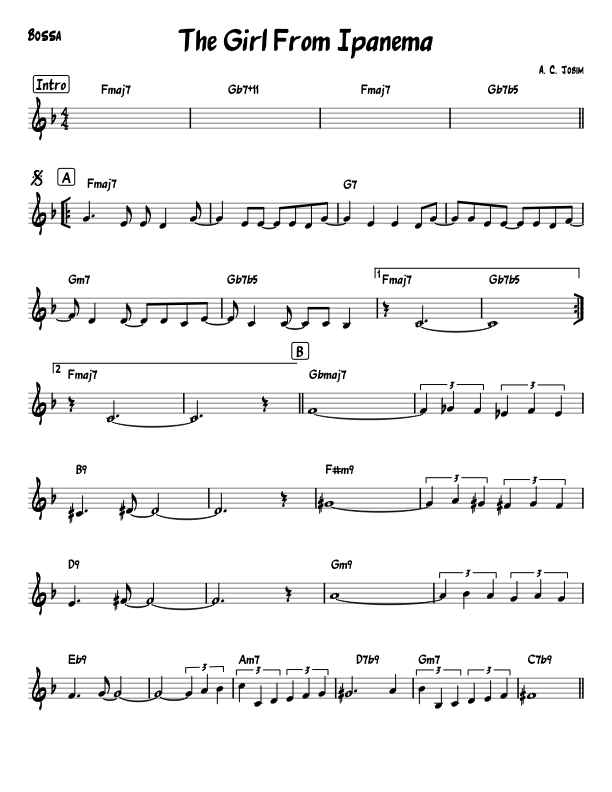 The Girl from Ipanema is an essential jazz standard that every jazz musician should know. The A sections chord progression, basically a I II7 II V is functionally the same as Take the A Train, Jersey Bounce, Desafinado and a few others.

The Girl from Ipanema is a well-known bossa nova, a worldwide hit in the mid-1960s that won a Grammy for Record of the Year in 1965. It was written in 1962, with music by Antonio Carlos Jobim and Portuguese lyrics by Vinicius de Moraes with English lyrics written later by Norman Gimbel. When sung by female artists it is typically rendered as "The Boy from Ipanema".

The Girl from Ipanema ("Garota de Ipanema") is a well-known bossa nova, a worldwide hit in the mid-1960s that won a Grammy for Record of the Year in 1965. It was written in 1962, with music by Antonio Carlos Jobim and Portuguese lyrics by Vinicius de Moraes with English lyrics written later by Norman Gimbel. When sung by female artists it is typically rendered as "The Boy from Ipanema".

The Girl from Ipanema is a some what easy song to learn. It's an AABA song form. The A sections are a I II7 II bII7b5 I progression with the bII7b5 being a tritone sub for a V. A1 turns back to the I using the bII7b5 tritone.

Here is one way to play the melody for The Girl From Ipanema in a "C" tuned ukulele, with low "G", C tuning.

To play in the original key of F you need a low "G" to cover the B below middle C in the melody.

We'll use one of the most famouse Bossa Nova songs to explore the Bossa Noa style.

The Girl From Ipanema

This is the original hit from 1964 that created the Bossa Nova craze worldwide. Garota de Ipanema won the Grammy Award for Record of the Year and started Astrud Gilberto's career.

Bossa Nova is one of my favorite styles to play.

The role of ukulele performing in the Bossa Nova style is the same as the guitar's role. The guitarist would typically play a nylon string guitar.

Bossa is a syncopated style with a bass note / chord approach.

The bass is typically the root or fifth of the chords and the thumb plays that as the lowest note of the chord voicing. The index, middle, and ring fingers play the remaining part of the chord.

The rhythmic part of the style is a mixture of Levels I, II and IIR of the Modular Phoneic Rhythm System by Chuck Anderson. This is the sytstem I use with GREAT results.

As a jazz standard The Girl From Ipanema is typically performed in the key of F as in the Sinatra and Jobim video. The original Getz/Gilberto recording is in the key of Ab, a better female key for Astrud Gilberto @Svg('link'). I think it sounds amazing in Ab.

Here I transposed to an equally haunting key of Db for the ukulele to take advantage of all four strings and get the same feeling of the original performance in the key of Ab. 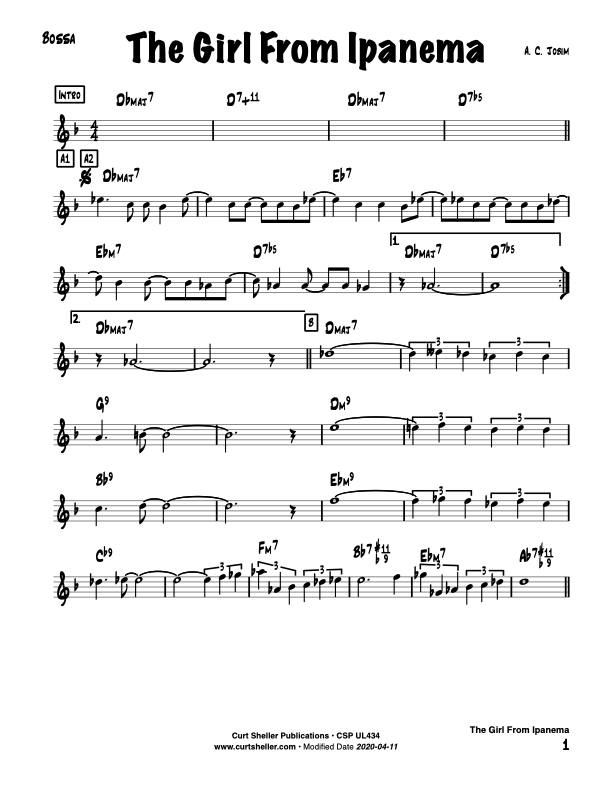 German music theorist and composer John Mattheson laid these characteristics and emotions out in his writings in 1713. They were rediscovered and translated by Rita Steblin in her book A History of Key Characteristics in the 18th and Early 19th Centuries in 1983.

These are the chords I'm playing in the video.

The A Section Chords for Ukulele

Triple Flats? – That can't be right. Well, yes Virginia theoretically it is. In the key of Db the second, the II chord is Eb. So the bII would be flatted for E double flat Ebb with te Bbb the fifth of teh chord. And flatting the fifth results in a tripple (bbb) flat. You have to keep the scale degree name / chord degree name in a full diatonic key. Now, granted not a lot of musians, very few in fact would know this and might call it D7. You would get the right pitches – but the names of the pitches would be wrong for the the key of Db Major .

The triple flats show up in the chord tones for the Ebb7b5. E7 is E G# B D, Eb7 is Eb G Bb Db, Ebb7 is Ebb Gb Bbb Dbb, and Ebb7b5 is Ebb Gb Bbbb Dbb. These are the correct chord spellings for these chords.

The B Section Chords for Ukulele

The B section of the songs is rich in harmonic movement. It is actually not that hard to navigate.

Accompanying track for the lead sheet.

No Road Map for Girl From Ipanema check back soon.

Related Lessons for Girl From Ipanema at this time.

These are the related song files, resources and assets for Girl From Ipanema at this time.

Accompanying track for the lead sheet.

Related Books for Girl From Ipanema at this time.

Related Lessons Series for Girl From Ipanema at this time.

Core Chords for Ukulele, The Big Six - From four F7 chord voicings or shapes, your can build your massive 4-part, a.k.a., “jazz” chord vocabulary. Beyond basic open position chords, basic movable form chords and a core set of 4-part chords. There are just too many chords shapes too memorize. Learning the principles of how chords are constructed and the ukulele fingerboard are the way to go. Then you can create more advanced chords like 9#11, 7#5-9, 13b5, 7+9 on the fly as needed.