Open position Em and its movable form and variations. 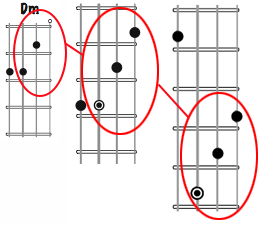 This lesson's chord can be learned relative to the Dm open position chord and its movable for chord presented in the previous lesson 10. It is just a different voicing of the root, flat third and fifth of this minor chord.

Learn a new Ukulele chord every day of the year. The chord for January 6th is Em. The 'm' is pronounced 'minor'.