Of the three core elements of music: Melody — Harmony — Rhythm. It's the harmony — the chords and chord progressions, a.k.a. songs, that you'll do the most of. So, whether your playing covers, other peoples songs or writing your own — you need to know your chords and how the works together.

“Chords can not be named out of context. They can only be named in the context of a chord progression or chord sequence and then only when the chord's harmonic function within that progression can be determined.” — Curt Sheller (me)

Chord — A group of three or more different notes sounded together or almost together.

Traditional three note chords are a called a triad. Two notes are an interval or dyad. Chords with four notes are a tetra-chord or 4-part chord, six notes are a hexachord, etc.

The Harmonic Function is a critical part of a chord and only once you determine the chord's, harmonic function and only then you can name a chord , as the same shape chord can have many possible names – but only one name at a time.

Chord Progression — A series of chords played in a particular order or sequence.

From WikipediA • A Chord, in music, is any harmonic set of pitches/frequencies consisting of multiple notes (also called "pitches") that are heard as if sounding simultaneously. For many practical and theoretical purposes, arpeggios and broken chords (in which the notes of the chord are sounded one after the other, rather than simultaneously), or sequences of chord tones, may also be considered as chords in the right musical context.

Chord Categories • Chords for learning purposes can be organized into one of the four categories below.

1) Open Position Chords • Your basic chords in the first four frets, including the open strings that most players learn first. There are, at most, 20 chords in this category to get you through the common chords for the basic keys.

2) Basic Movable Form Chords • Your basic Open Position Chords, re-fingered and transposed up the fingerboard to different keys. This includes transposing the the open strings as well. In C Tuning, the Bb major, based on the open position A major chord, is typically the first movable form we learn that fits this category.

3) Jazz” Chords These contemporary 4-part chords find their way into a wide variety of music. This is a massive category where you really start to learn how chord construction works and can create any — Yes — ANY chord you run across.

4) Free Form Chords • These are the chords that don't fit into one of the four chord categories or are a basic triad. This is where you “REALLY”, and I mean really, know the ukulele fingerboard and the notes of the chord and can create it.

And at the heart of an overwhelming number of the chords we play are: Triads .

Traditional and Contemporary Triads • These triads, built in thirds, are the foundation for all chords in the above categories. Triads are also great for when you are improvising. The “adjacent set of three strings” are how these can be learned. The Basic Open major and minor chords are triads, with one of the their notes doubled.

A handy-dandy reference chart of open position chords in five common keys of C , G , D , A , and E . With seventh chords, diminished and augmented chord for every root.

A Ukulele Chord a Day

The Ukulele Chord a Day series of lessons started in 2013. Videos for each chord were added in 2020.

This is a great series for beginners to get started and actually any level can benefit from the added material and information on each chord.

After learning the Basic Open Position chords, these 20 plus ukulele chord lessons cover the open position forms and their movable forms. This allows you to play basic chords in ANY key.

Click on any chord above to go that specific lesson.

These chords, often call Jazz Chords, find their way into a wide range of traditional and contemporary music. They form the foundation for building those chords with the wacky names such as 13-9, #11, 9b5, etc.

Here are a few of the chords that are part of the Cool Ukulele Chords Series of lessons .

What is a Chord Progression?

For a more elaborate description checkout the WikipediA : article and link below.

Turns out there are a lot of common chord sequences that make learning a lot of songs easier.

What is a Chord Progression?

A chord progression (or harmonic progression) is a series of musical chords, or chord changes that "aims for a definite goal" of establishing (or contradicting) a tonality founded on a key, root or tonic chord. In other words, the succession of root relationships. Chords and chord theory are generally known as harmony.

A chord progression can be thought of as a harmonic simultaneity succession: it offers an ongoing shift of level that is essential to the music of Europe (at least since 1600), Oceania and South/West Africa. A change of chord, or "chord change", generally occurs on an accented beat, so that chord progressions may contribute significantly to the rhythm, meter and musical form of a piece, delineating bars, phrases and sections.

So, Lets Get Started

Without knowing where you are musically I would simply recommend to head over the Songs section, pick a song and learn the chords.

Here are a few really simple ones without a lot of chords that you might passively know:

Basic Open Positions Chords - C Tuning in the common keys of C, G, D, A, and E - with seventh chords in all keys. Includes diminished and augmented chords.

These charts are available in the Books section of the site by clicking on the buttons below the charts.

The following two charts are for C Tuning and organized by the common chords that show up in common keys.

These charts are FREE downloads and available in right hand and left hand versions. 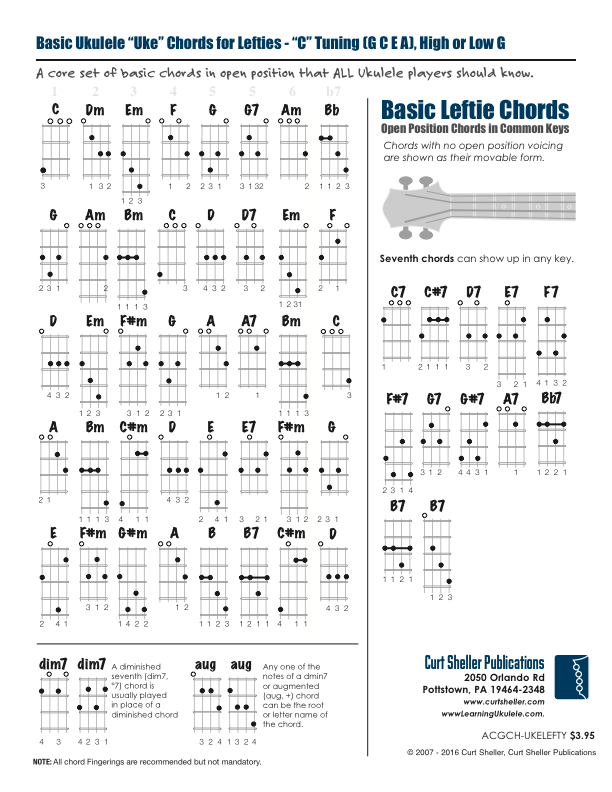 Basic Open Positions Chords for Lefties - C Tuning in the common keys of C, G, D, A, and E - with seventh chords in all keys. Includes diminished and augmented chords. 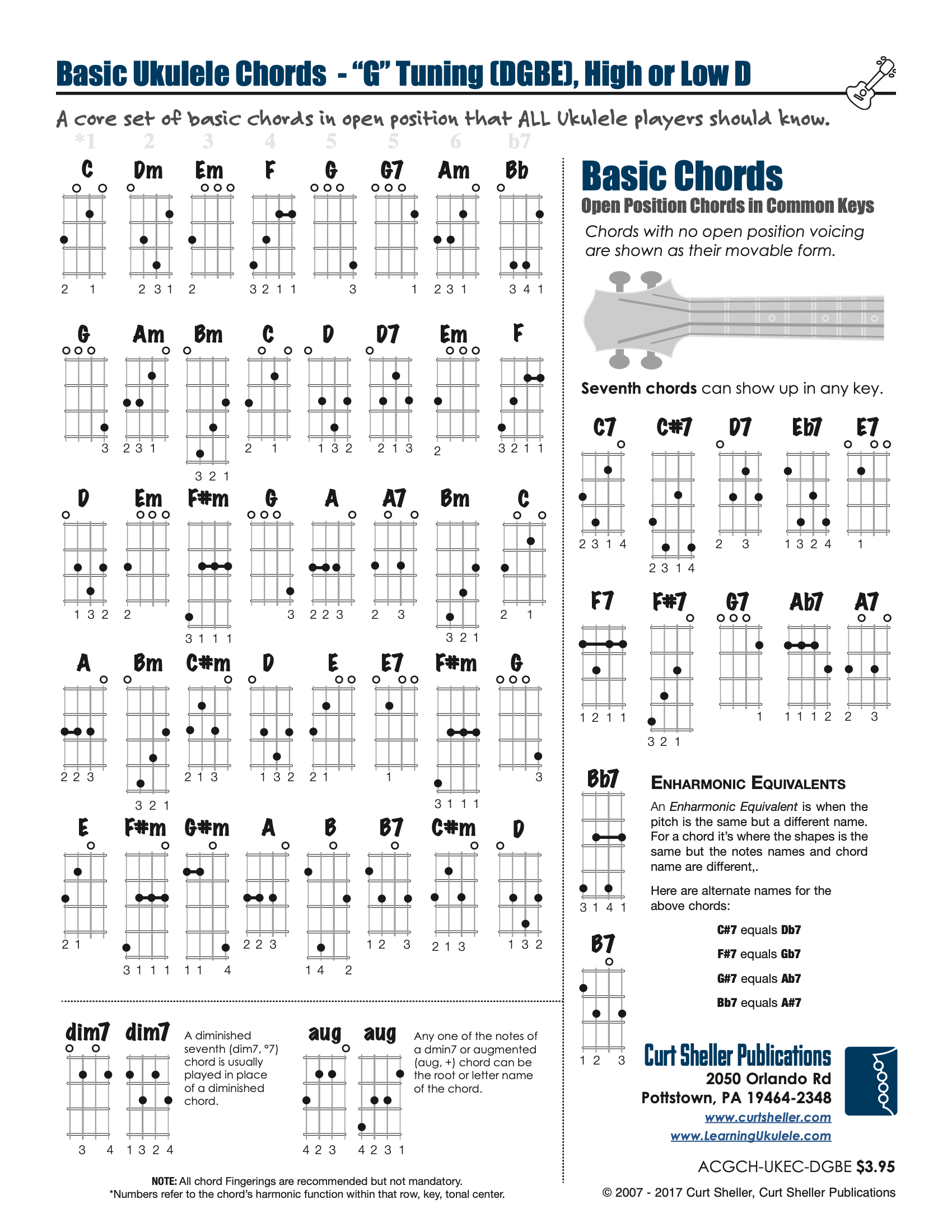 Basic Open Position `Ukulele Chord Chart - Baritone/G Tuning in the common keys of C, G, D, A, and E - with seventh chords in all keys. Includes diminished and augmented chords.

These charts are available in the Books section of the site by clicking on the buttons below the charts. 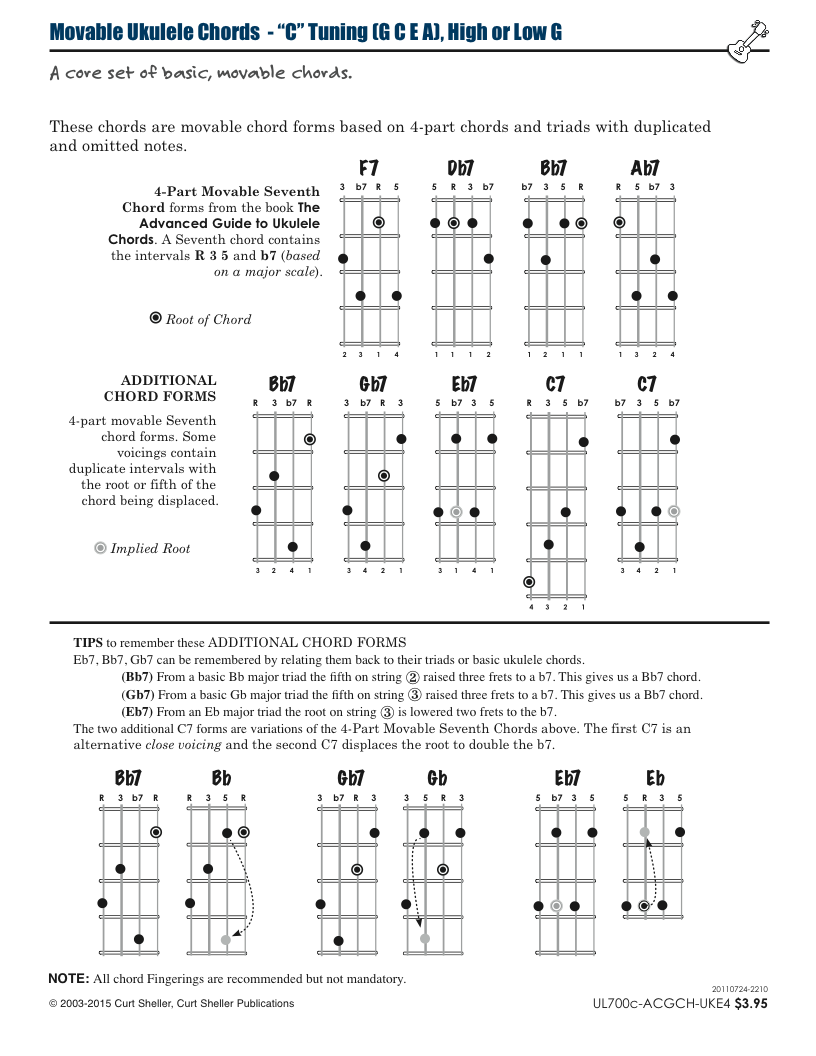 Core Ukulele Chords - Sevenths • These chords are movable chord forms based on core 4-part seventh chords and triads with duplicated and/or omitted notes.